The next Olympic Curling gold medalist could be you! 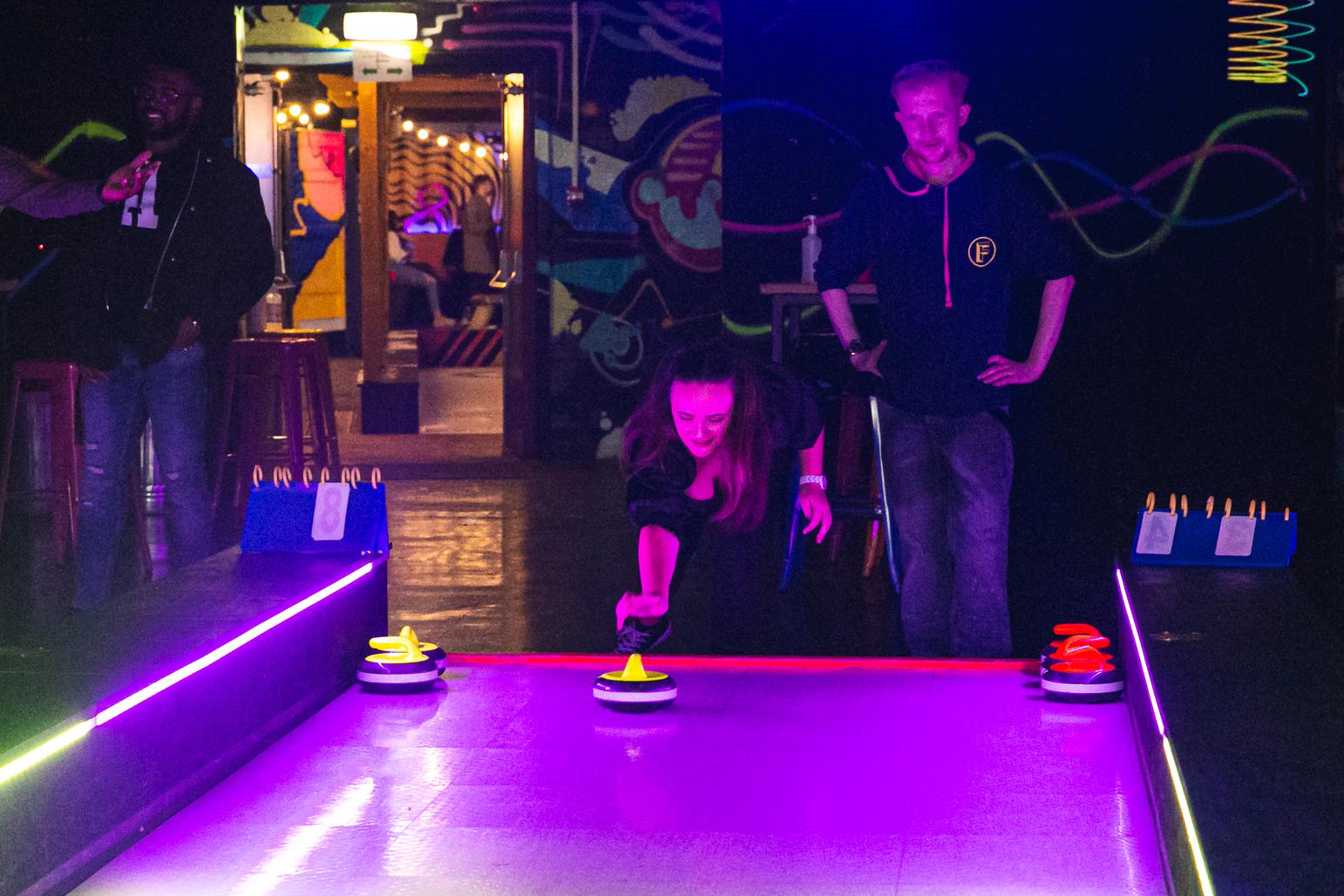 Make some ‘broom’ for the new sport that’s taking Birmingham by storm. Why limit curling to the Winter Olympics, when we have six fantastic indoor and outdoor lanes at the CurlClub here at The Floodgate. It’s time to grab that curling stone by the horn and see whether you are cut out to be a curling Olympic champion!

Now, believe it or not, The origin of curling dates back to 16th century Scotland, where the sport was first played on frozen ponds and lochs before it was even considered a winter Olympic event. With our very own Team GB doing us proud internationally, having won the first-ever curling Winter Games in 1924 with the gold medal. This was declared as the first-ever actual curling winter game in history. The International Olympic Committee ruled that the curling medals were part of the official Olympic program in 1924, and not a demonstration event as many authoritative sources had previously claimed. It then became an official medal sport in the Winter Olympic Games since the 1998 Winter Olympics.

Since then, Team GB has won one further gold medal with Rhona Martin’s “stone of destiny” at Salt Lake City in 2002 before the double medal success of silver and bronze at Sochi 2014.

A note-worthy team to mention is Team Canada, who have been dominating the sport! Canada is the most successful nation having medalled at every single Games since 1998 –  amounting to six gold, three silver, and two bronze medals.

Now that you know more about some of the championship-winning teams, do you think that you could be any good at curling? It’s one of those spots that’s rarely played, so how would you know if you have that champ curling mentality? Well, let’s get a lowdown on what is required to become a boss curler.

Curling combines physical exercise with strategy, teamwork skills, and mental skills. All ages, genders, and abilities can play together and against each other. It is a highly strategic sport, also known as "chess on ice". When it comes to sweeping, it warms the ice and reduces friction, allowing the stone to travel farther and straighter. In other words, to be a skilled curler you must get a good sweep on when it comes to your broom skills, whilst being as cold as ice under the pressure. Think of that time you had a house party and had a deadline to clear up before your parents came home. Now channel that, and you will be sweeping like a champ before you know it.

There’s really only one way to find out whether you are a secret curling champion. Get yourselves down to The Floodgate, step into the CurlClub, and give it a go! Come and brush up on your curling skills by booking a slot. Winter Curling Olympics here we come!

Or as Mr T was actually quoted to tweet - “I pity the fool who don’t like curling” #curlingiscoolfool. Well said Mr T.